About us > Staff > Department of Digital Economics and Business Analytics

Problems of project development in Ukraine.

Monographs and sections in collective monographs:

She was born on July 13, 1988 in the city of Novoyavorivsk, Yavoriv district, Lviv region.

In 2005 she graduated from the specialized Novoyavorivsk Lyceum of Chemical and Biological Profile.

From 2005 to 2010 she studied at the Faculty of Economics, majoring in business economics at Ivan Franko National University of Lviv.

In 2010 she started working as a lecturer, and later as an associate professor at the Department of Economic Security of Lviv University of Internal Affairs.

In 2017 she defended her dissertation on economics and management of the national economy.

In 2019, she studied at the George Marshall Research Center in Germany and the United States, majoring in the fight against transnational organized crime. 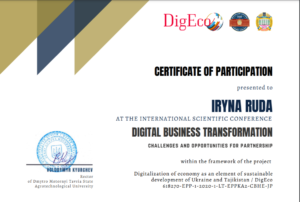 Page with teachers schedule not found!