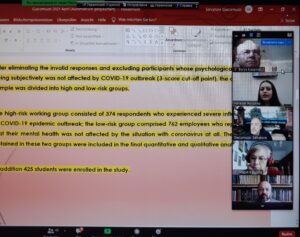 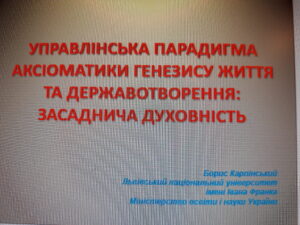 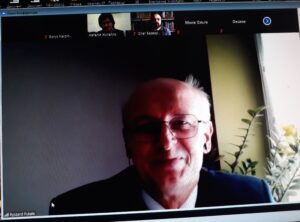 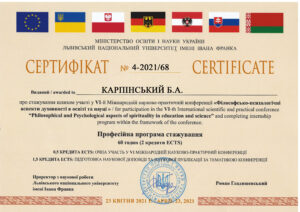 Modern practice proves that public management and administration acquire its priority in the ideological architecture of modern statehood. This issue is constantly in the eyes of managers and researchers, as evidenced by the allocation of a separate scientific section on the direction of the VI International Scientific and Practical Conference «Philosophical and psychological aspects of spirituality in education and science», which took place on April 23, 2021, on the basis of Ivan Franko National University of Lviv. The conference aroused great interest in the world scientific community, as evidenced by a large number of participants and its division into 2 parts: the first – the plenary heard scientific developments from different countries, and the second concerned graduate students and students who are already paving their way in management science.

The report «Management paradigm of axiomatics of the genesis of life and state formation: fundamental spirituality» was made by Professor, Doctor of Economics Borys Karpinsky (Department of Public Administration and Business Management, Faculty of Finance and Business Management, Ivan Franko Lviv National University). The results of more than a decade of scientific research on the issue were concentrated, as the separation of the management paradigm of the genesis of life and state formation is the first time, it required a comprehensive analysis and systematization of several studies in various sciences. In general, a significant scenario periodization of genesis and transformational development in the living environment was identified (ie in the transition from inanimate to living matter with its socio-economic and state-building orientation and taking into account the spirituality of the citizen).

In particular, it is noted that in state-building processes one should not neglect the need for purposeful intensification of attention to the taxpayer at various levels of government through involvement and his spirituality in the context of patriotism. The state-creative patriotism of the nation is all that the people in general and each citizen, in particular, do in the interests of creating an independent, sovereign, civilized state. According to one of the above axioms: the taxpayer is the real creator of his state, and the state-creative patriotism of the nation in its quantitative dominance is concretely manifested through the statutory payment of taxes by its citizens.

Professor Borys Karpinsky is reasonably emphasized that only the coordinated work of state institutions and the United Nations can effectively and comprehensively solve this strategic developmental problem of philosophy of doctrines of spirituality and statehood, which organically follows from the selected management paradigm of axiomatics and signs of modern life and genesis, stimulating the spirituality of the individual.