News > To the Day of Ukrainian Statehood

To the Day of Ukrainian Statehood

On July 28, 2022, on the Day of the Christening of Kyivan Rus-Ukraine, our state for the first time celebrates the Day of Ukrainian Statehood, which was established by the Decree of the President of Ukraine No. 423 of August 24, 2021 with the aim of confirming the thousand-year-old traditions of Ukrainian statehood in the national society. Today, our state celebrates the 1540th anniversary of Ukrainian statehood, because, according to the research of foreign and domestic historians, Ukrainians are among the top five European nations with the oldest tradition of statehood.

On the occasion of the Day of Ukrainian Statehood, the professors and teachers of the Department of Public Administration and Business Management and students of higher education of the educational program “Public Administration and Business Management” listened to a lecture by the head of the Department of Ancient History of Ukraine and Archival Studies of Ivan Franko National University of Lviv, PhD., assoc. prof. O. Shchodry on the topic “Ukrainian state tradition: genesis and development in the Kyiv-Rus state”, which was held with the assistance of the Department of Education and Science of the Lviv Regional State Administration. The lecturer opened the issue of the origins of Ukrainian statehood and the history of the statehood of modern European countries, introduced the listeners to the first mentions of Rus in chronicles (“The Tale of the Time Years”) and in foreign sources, the first mention of Rus in which is dated May 18, 839. There are also historical finds, which prove the possibility of the emergence of Ukrainian statehood two hundred years before the Christening of Kievan Rus-Ukraine by the Prince Volodymyr the Great.

Therefore, knowledge of national history, possession of reliable facts about Ukrainian state-building processes, formation of patriotic consciousness among the citizens of the state are a powerful weapon in the information war, because the modern full-scale war in Ukraine is not only a struggle for the independence and territorial integrity of our state, but also for the identity of our people as the Ukrainian nation. 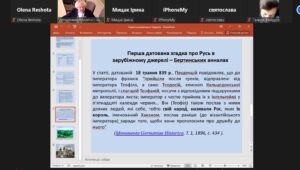 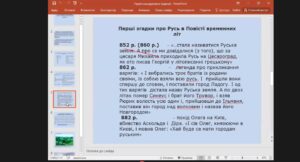 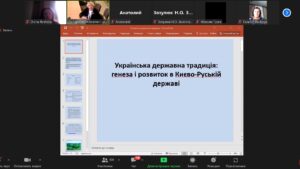