In the bounds of the Reporting Scientific Conference of Ivan Franko Lviv National University in 2017 a presentation and discussion of a new series of scientific publications «State and Strategy» (founder of the series, professor Karpinsky B.A.) was held. The monographs by Karpinsky B.A .: «State-creative patriotism of nation: tax dominant» (534 p.) and «Negative synergy: the manifestation of financial productivity  of the territory» (116 p.) were considered in the presentation. 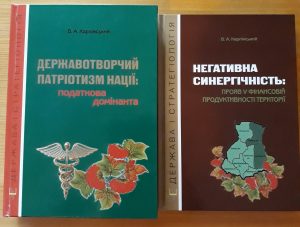 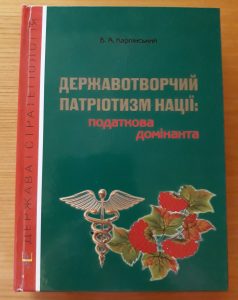 The normatively-legal providing of financially-tax mechanism of investment increase is systematized as active means of realization of state-creative patriotism of nation in transformation-reformative terms. Modern innovations, first of all, tax aspiration, that influence on effectiveness of this patriotism in a dynamics, are complex considered. It is suggested to take into account influence of shadow economy on displacement in the level of this patriotism in separate administrative-territorial units. The methodical recommendations for determination of the main factors of illegal enterprise as financial leverage of increase of tax receivables at development of state-creative patriotism of nation are worked out. First certainly characteristics of state-annexor are reasonable and her influence on state-creative patriotism of nation, in particular, in part of evaluation of financially-resource losses of Ukraine from violation of it territorial integrity and system measures in relation to their decline and neutralization are worked out.

Monographic research is intended for both an academic researchers and workers of state authorities and on the wide circle of curious readers, that aim to understand the state creation sources, forming of national patriotism on the basis of quantitative approach and modern influences on these processes of the already globalized environment, and also possibilities of activation of administrative decisions in this area with the aim of increase of prosperity and longevity of nation. 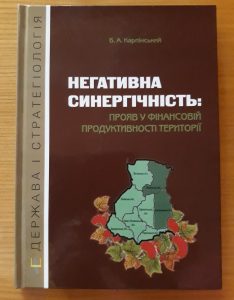 By the settlement procedures according to the proposed method, we conclude: negative synergy affects the financial productivity of the territory, but depending on the structure of the formed economic complex, this connection in each of the studied regions of Ukraine is different. Highlighted and substantiated the specificity of the synergistic effects manifestation (positive and negative) on the rate of change in the index of financial productivity of the territory.

The monographic research designs for academic researchers and employees of state authorities and for a wide range of inquisitive readers who seek to understand modern approaches in assessing the state of financial and economic space, based on the management decisions made at different levels.