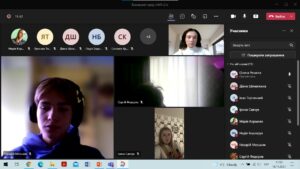 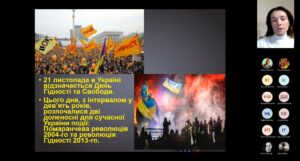 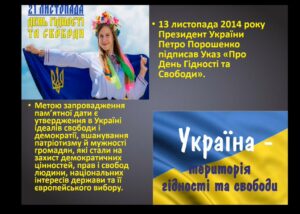 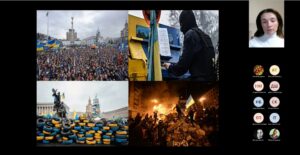 For students of the UFP-21c group, the group’s advisor, associate professor of the Department of Public Administration and Business Management, Olena Reshota held an educational event of national and patriotic nature “Day of Dignity and Freedom”, which is celebrated on November 21 each year. The holiday is set in honor of two revolutions: the Orange Revolution (November 21, 2004) and the Revolution of Dignity (November 21, 2013).

According to the Decree of the President of Ukraine № 872/2014 “On the Day of Dignity and Freedom” of November 13, 2014, the holiday is celebrated « in order to establish in Ukraine the ideals of freedom and democracy, preserve and convey to present and future generations objective information about fateful events in Ukraine at the beginning of the XXI century, as well as paying due respect to patriotism and courage of citizens who in autumn 2004 and in November 2013 – February 2014 stood up for democratic values, human and civil rights and freedoms, national interests of our state and its European choice… ».

The educational event covered the events of the Orange Revolution and revealed the stages of the struggle of Ukrainian patriots for the preservation of the foundations of democracy during the Revolution of Dignity. The events of November 21, 2013 – February 22, 2014 showed the world community that the highest goal for the Ukrainian people was, is and will be to preserve the democratic values ​​of Ukrainian society.